People spend a lot of time on mobile apps per day, but that doesn’t mean people use just any app that’s available. The majority of their time is spent in the best apps. Sluggishness, inconvenient UI/UX, or constant problems with business logic leads to uninstallment.

The world of mobile applications is overcrowded. The number of applications in the App Store has increased to 2 billion, and in the Google Play Store the number of apps reached 3 billion in the 4th quarter of 2020. Statista estimates that the number of downloads is only going to rise, and by the year 2021 will reach more than 350 billion in total. Here’s the bad news: the competition on the mobile app market is intense. The good news is that most of these applications are low quality and people tend to quit using them as soon as they face problems with the app.

Poor ratings in the app stores and uninstallments are the consequences. Quality is a must for a successful application, and it cannot be achieved without continuous and thorough testing.

There are three main goals of mobile app testing:

This results in your application working smoother and your users being more satisfied. In this article, we’ll tell you all about different mobile testing techniques for mobile applications from the arsenal of a professional tester.

Are you trying to decide how to test your mobile app? Maybe you’re lost among the dozens of mobile app testing tools and don’t know which to choose? If so, then this article with a complete list of best testing tools for both Android and iOS is for you.

How Is Mobile Testing Different Than Desktop one?

The differences between mobile and desktop testing are pretty big, and you should bear that in mind.

Testing mobile applications require lots of effort, and beginners often don’t know where to start. But it’s not only beginners who face issues when it comes to testing. Testing techniques for iOS and Android apps testing techniques are similar but equally challenging.

We’ll build up to explaining these techniques in more detail, and will begin by describing types of mobile application tests.

Are you planning to expand your business online? We will translate your ideas into intelligent and powerful solutions.

In general, there are four types of tests for mobile applications:

Unit tests are the first step developers make to a properly working application. As the name suggests, they’re used for small units of code such as functions or classes. Each time a developer finishes working on a small piece of code, he or she has to test it. Unit tests are written by developers themselves, and this kind of testing is surely worth the effort. It’s easier for developers to change the code they’ve written because they can see exactly where something went wrong.

All development environments have unit test frameworks – programs that facilitate the testing process. Testing frameworks allow developers to make tests for every single function. All bugs found at this stage are usually fixed in the code without describing them in the bug tracking system.

Of course, it’s impossible to test everything, but here’s a piece of advice: test as much as possible. Each unit test should be dedicated to a small part of a feature. All unit tests are connected, so you get a kind of chain. If one part of this chain fails, the whole test will fail.

Mobile app testing best practices include writing automated tests before you start the development process. This is called test-driven development or a test-first approach. If you use this technique, you first generate small pieces of code. Then you launch the tests that you wrote before coding. Development lasts until all tests are successfully passed.

Software Quality Assurance Tools and Techniques We Use at Mobindustry

Use the best tools for making your apps and websites bulletproof

At first this may seem too time consuming. Lack of time is mentioned as one of the most serious problems in testing, but performing unit tests can actually save a lot of time and improve development speed. In addition, it can serve as a kind of documentation for your library. Note that unit testing can take up to 30% of the estimated development time.

Auto tests are more complex than unit tests, and are written by QA engineers using Java or Ruby. They are mainly used to test unexpected behavior of a user and check how the application copes. For example, a user may give incorrect data like wrong address or phone number or press a button three times.

Auto tests are created based on test cases, which include unexpected behaviors and some other circumstances such as

These things can be checked manually, but usually auto tests are used because many actions have to be repeatedly checked. Auto testing is the perfect instrument, as the QA engineer only has to write a test once and can then use it throughout the development process. While unit tests check only positive results, auto tests are interested in any outcome – positive, negative, or even odd.

The drawback of auto testing is that such tests are rather expensive and complex. If anything changes in the application – if new features are added or there are changes to an app’s logic – the QA will have to rewrite the auto test. That’s why such tests are usually used only for core features. For example, for an ecommerce application, features like search, ordering, and buying probably won’t change, so you can write auto tests for them. For minor changes, manual testing can be used.

System tests check a higher level of functionality. They’re much broader than unit tests and they test the whole application, comparing the real result to the expected result. It’s very important that the system stays the same during testing so the input is the only thing that can change the results of the test.

Of course, an application’s design may change many times before its release, that’s why each change to a system has to include a system test as well. Creating a test for your application and then trying to change your code so it passes the test is a big mistake.

System tests are basically manual tests, and are performed manually by QA engineers. Manual testing is the most important part of the testing process. During the design and development phases, QA professionals gather all the ideas developers and tech specialists had while coding and prepares a testing plan.

Acceptance tests are done at the very last stage of development. QA engineer is responsible for them, but the customer also takes part in the testing process. This testing is done on a ready-to-release product.

Acceptance tests also use some test cases and scenarios based on the app’s requirements. If it does, the customer accepts the application and releases it.

How to Make Sure Your App Is Secure: Penetration Testing

Find out how penetration testing can help keep your app robust 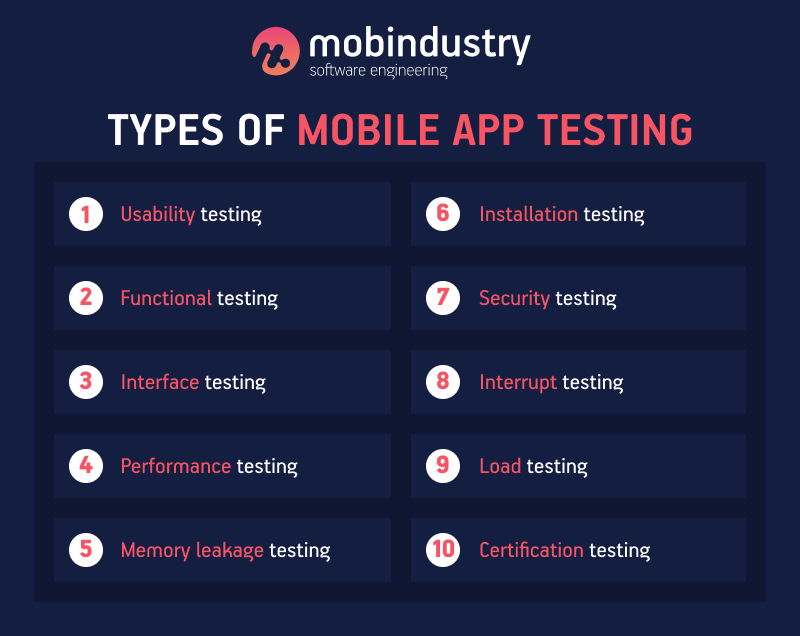 You can see how important testing is for the success of an application.

We at Mobindustry spend lots of our development time just on testing our products and following mobile testing best practices.

If you have any questions on testing techniques or you don’t know which strategy to choose, don’t hesitate to contact us for a consultation.

Are you planning to expand your business online? We will translate your ideas into intelligent and powerful solutions.

App Development Cost: How to Estimate Your Mobile App Project