by Sveta Cherednichenko
on 11.09.2017
Native Development vs Cross-Platform Development: Myth and Reality
5 (100%) 3 votes
Subscribe to our newsletter

Are you already thinking of building your own mobile app? If so, you’re probably getting ready to consider tons of details. Your development approach is one of them, and at first choosing it may seem frustrating.

Statista’s forecast says that the number of smartphone users around the world will only continue to grow. This growth has made the mobile app a business standard. Apps have opened countless possibilities for businesses. It’s no surprise that many entrepreneurs want to go mobile.

Endless debates around cross-platform and native mobile development are probably making your choice even harder. In this article we’ll try to make everything clear and help you with your decision.

Let’s take a peek at the history of mobile app development. When apps weren’t so numerous, life was easier because no one had to choose which approach to take – there was only the native approach. But then cross-platform approaches suddenly appeared and gained popularity in the blink of an eye. They promised a better cost/quality ratio; moreover, they made app development much easier. Many startups and businesses were happy to take a better and cheaper path to success.

But then problems appeared: applications didn’t work properly; performance was far from perfect. But developers started finding ways to improve this situation, and today the battle between cross-platform apps and native apps continues. But don’t worry! We’ll cover all the details. Before we do, however, you should understand how apps work.

The frontend and backend are linked parts that make up every application. The backend is responsible for processing and storing information and provides the business logic. Usually, it also provides you with a CMS – the admin panel where you can make changes to your app without coding.

The frontend is the part that interacts with users. It’s controlled by the business logic, and each time a user does something in your app, it addresses the backend (the server) and to see how it should respond. Layouts and page rendering are done by the frontend part of the app. APIs are another way to implement services. APIs are pieces of code with instructions that can be used by third-party applications. With their help, you can use certain functions of another company’s software in your own. If you have a social media application, for example, you can integrate a Facebook API to provide more convenient registration for your users.

Your choice of a native or cross-platform approach mostly affects the frontend, as we’ll explain further.

Native applications are built for a particular platform only. You can easily find such applications on app stores.

These applications use an operating system’s native language; for example, Java/Kotlin is used for Android, Objective-C/C++ or Swift for iOS. This allows apps to have full access to a device’s services and functions and work flawlessly as a full-fledged part of the platform.

Want your app on both iOS and Android? With native development, you’ll have to develop it from scratch for each platform. This may sound extremely time consuming, but native apps have the wonderful ability to use all of a smartphone’s services and functions. Thus geolocation systems, cameras, and accelerometers will work perfectly.

Сross-platform mobile application development is done only once for all platforms using HTML and CSS; JavaScript is responsible for the logic. Cross-platform apps are essentially HTML-based websites for smartphones. You don’t need to adapt them to every single platform, but be aware that most functions of mobile devices will be unavailable.

Read Also:
Mobile App, Responsive Website, or Something in Between: What to Choose for Your Business >

Special interfaces are possible solutions to this problem, but they’re still not able to give full access to a device’s services.

Cross-platform apps are built with tools such as PhoneGap (HTML+JavaScript), AppCelerator (C#/.Net), or Xamarin (Objective-C). They essentially wrap an app so it looks native. Some people call these apps hybrid apps.

For hybrid apps, the whole backend is written only once and is used across all platforms; however, the UI is developed separately for each platform.

Of course cross-platform apps do work on all platforms – otherwise they wouldn’t be called cross-platform. But this isn’t the whole truth. Many people think that cross-platform apps work perfectly on any possible platform in the world. This is partially true, but only on one condition – developers have to write additional code and think about solutions to adjust the app for each platform. Native apps don’t need any adjustment at all – you can be sure of their performance.

User interfaces are probably the biggest problem with cross-platform apps because they can’t meet the guidelines of multiple platforms. Guidelines are directions from a platform’s developers on how to create apps according to standards. In brief, guidelines specify the location and appearance for all parts of an interface so apps are intuitive to use.

Native languages have all the necessary instruments to create clear, familiar interfaces that meet guidelines. Achieving the same effect in cross-platform apps requires real effort from developers, who might even need to consult with native app developers. All cross-platform frameworks we’ve mentioned can imitate native interfaces. The performance will still be worse, however, and they’ll work slower and their design will be a bit different.

The UX is the next-most important thing for users. According to Gartner, UI and UX are going to be even more important in the future. ComScore says that few people download even one new app a month. The battle for users is becoming even more severe. An appealing UI/UX is crucial for a new application to get its share of the market.

Let’s take the Back button as an example. It exists only on the Android platform. Users with iOS devices have only two options – either they get used to this button or developers build a design for each platform and find solutions for all the problems that arise. So in the end you still have to develop two apps, only with one language.

This one is mostly true – cross-platform apps can’t use device’s services and functions (camera, geolocation, etc.). This depends on the framework, however, and each has its own particular limitations. Is this such a great problem though? The answer depends on the type of app you’re developing, as we’ll discuss in more detail.

Another problem is that device manufacturers often create custom versions of the platform, which makes it hard to keep up with changes.

This is the main argument for cross-platform development as it is believed to be cheaper. This is actually the main myth that attracts companies and startups toward cross-platform apps.
It seems pretty accurate, right? For two platforms you’ll need two developers, and that means more time and money. Cross-platform app development requires only one developer who knows HTML and JavaScript.

Some people think that if they pay 100% of their project budget for native app development, they’ll pay maybe 40% or 50% for cross-platform app development. Unfortunately, the reality is far from that. 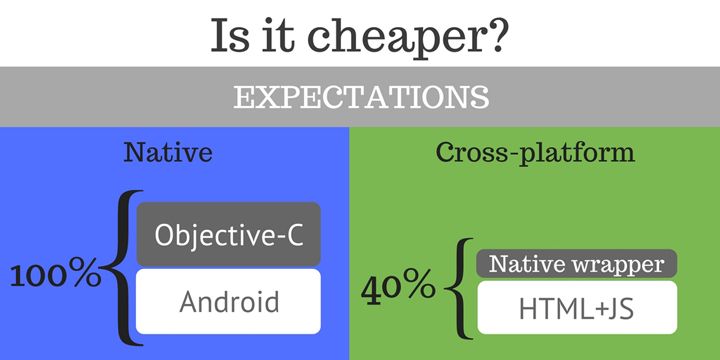 Practice shows that a cross-platform app which works well on iOS shows worse performance on Android, which is why optimization will also be time-consuming.

Complex cross-platform apps will require even more work. The developer will have to solve all possible problems with a device’s special functions, resulting in a huge pile of code fragments.

To sum things up, we’ve put all the pros and cons of native and cross-platform development approaches in the infographic below:

The infographic below may make your choice easier.

To make it clearer, native mobile app development is a good idea if:

Cross-platform development is a perfect choice if:

As you can see, there are a lot of details to consider when choosing between native and cross-platform app development. You’ll definitely need a consultation with a development team to help you make your choice, but we hope this article will help you have a better conversation with your developers.

If you hesitate about which approach suits your idea best, it would be our pleasure to consult with you. Our vast experience building native apps – whether location-based, ecommerce, or social – allows us to give the best advice on your idea.