How to Develop an App for the Internet of Things (IoT)

The Internet of Things (IoT) is a technology of the future that’s already becoming reality. Its possibilities for health, agriculture, manufacturing, and daily life are crazier than anything a sci-fi writer of the last century could have imagined. Mobile apps will be a point of connection for many IoT devices, and in this article we explore how to build an IoT app of the future.

Why develop a custom Internet of Things application?

The IoT market is huge, and it has something to offer many other markets. It seems like Internet of Things devices will soon be everywhere, from smart cities and agricultural fields to huge manufacturing plants and people’s homes and cars.

In this article, we focus on consumer IoT because it’s the area where mobile apps will be most needed. In other sectors, for example agriculture and enterprise business, IoT devices may not need mobile interfaces. They can connect directly to the cloud or be controlled using web apps.

IoT devices for consumers, on the other hand, typically use apps: people have their mobile devices at hand all the time. Smart homes are probably the first thing that comes to mind when you think about IoT for consumers. And smart home technologies are becoming more popular each year.

But not only smart homes demand mobile interfaces for connecting devices. Consumers can use IoT for:

Growth of the IoT market for smart homes promises to be even more impressive. A Forbes survey shows that two-thirds of consumers say they’ll probably purchase IoT devices for their homes by 2019. Only half of respondents said they were likely to purchase wearables.

By 2019, 1.9 billion smart home devices will be shipped to consumers, generating revenue of around $490 billion.

What about smart and connected cars? According to Machina Research, 90% of all new cars will be connected to smartphones. Compare this to only 10% today.

Internet of things is one of the most promising technologies that will change the way people live in their homes, drive cars, work and entertain themselves

As you can see, the number of connected devices will only grow, and they’ll all require software. You can create an IoT mobile application and start conquering this market, which is far from saturated.

What you need to know about IoT app development

How can you create an IoT app? This of course depends on your idea. The set of features will be different for a smart home application and for a connected car app. However, there are some basic things you need to know before you start to develop app for the internet of things.

First, let’s look at the structure of any IoT system.

Any Internet of Things system consists of four main components:

Hardware includes different low-energy sensors that work over Bluetooth and connect to the internet. You’ll need to decide whether you need third-party or custom hardware to implement your idea. A mobile device will also be a hardware component in your IoT system.

Software for an IoT system should be a cloud-based application, either web or mobile, that’s basically a dashboard for managing and controlling all IoT devices connected to it. This dashboard should also collect information from sensors and show it to users.

The cloud is one of the most important technologies for IoT. It processes the data and arranges it. The greatest advantage of the cloud is that you don’t need your own physical resources for storing data.

The network sends data both ways: from a mobile phone to sensors and devices and back. The network links all devices within the IoT system. 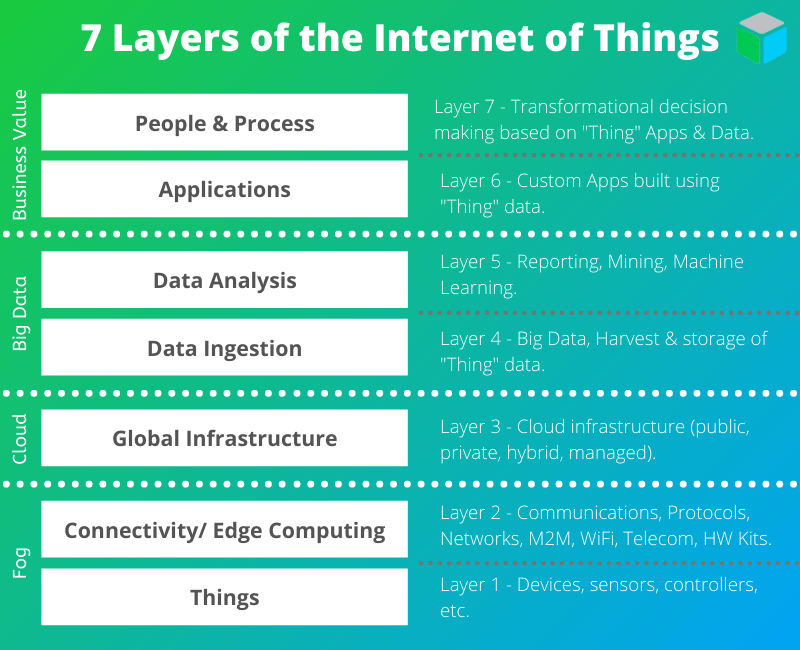 Before you start to develop IoT apps, you should learn about the challenges the industry has yet to solve.

Because the whole IoT industry is poorly standardized, security rules for IoT are rather vague: each manufacturer and IoT software developer solves security issues in their own way, making IoT systems more vulnerable.

Read Also:
How to Make Sure Your App Is Secure: Penetration Testing >

IoT networks have lots of entry points because of the large number of connected devices, so a hacker can find a vulnerability in just one place and then compromise the whole network. This can result in a hacker gaining access to all information from home microphones and wearables, for instance, exposing sensitive health data and user locations.

Security is a major issue for IoT, because lack of standards and a number of connected devices within one IoT ecosystem makes it easy for hackers to get access to data and control over the whole system

Technological inconsistency is another challenge the industry hasn’t yet solved. If you want to create an IoT application for a smart home, for example, you can’t be sure your mobile app will connect to all smart devices inside a home unless they’re also made by your company.

For example, if a customer buys smart light bulbs from one company and a thermostat from another, they probably won’t work together. So consumers are restricted to using only one producer’s devices, which makes the whole IoT industry fragmented: each company has its own standards, APIs, and connection and security standards.

Security and inconsistency are two major challenges of modern consumer IoT devices. Mobile apps have lots of standards and guidelines that allow them to work on different devices and connect to each other with the help of APIs. Internet of Things devices aren’t there yet.

because of the potential of IoT, there are many startups offering platforms for creating more apps for the Internet of Things that will make devices work together as unified systems

Let’s explore how you can approach mobile development for IoT.

How to create an IoT app

There are many platforms that you could use to build your IoT application. You can choose any of them, but pay attention to what technologies they support and how much they’ll cost.

These are proven platforms for IoT development:

Many of these platforms are trying to solve the inconsistency issue, allowing IoT developers to connect devices from different vendors that speak different protocols into one unified system. For example, Google’s IoT platform, called Android Things, now supports devices from a number of manufacturers and can connect to low-energy sensors.

Apple’s HomeKit offers a set of approved devices that developers can connect to their IoT systems as well as guidelines for creating IoT software.

To give developers access to other devices that are outside of the Google and Apple ecosystems, Android Things and HomeKit offer their own APIs.

Using platforms is the best way of develop iot apps.

3. Think of scalability in advance

Think about the pace at which you plan to develop your app’s functionality. Whether your app will stay relevant depends much on scalability. It has to manage increasing amounts of data and many different devices and processes. Cloud technology is best for IoT for this reason.

4. Make sure your app is fast

IoT apps have to be extremely fast. When it comes to sharing data and remotely controlling devices, the price of each lag is too high. Imagine a connected car that won’t immediately react to your commands. This is why performance and high-speed connections should be one of your top priorities.

The absolute top priority for your IoT application must be security. Unfortunately, because of the large number of connected devices that all live in one network, IoT technology is rather vulnerable to data infringement.

And because of the areas where people use IoT most – their homes, cars, and healthcare devices – these attacks can result in exposing private and sensitive data.
Make sure you use secure tools to build internet of things application.

Here are a few tips on ensuring security in your IoT app:

Read Also:
How to Protect Your Android App with Obfuscation and Encryption >

Here are a few examples of the best consumer IoT applications. You’ll get an idea of how you can use IoT for different purposes to make people’s lives easier.

Nest is one of the best examples of an IoT application for smart homes. The company promises to automate your home and give you valuable insights on energy consumption. Nest is compatible with smart thermostats, doorbells, home alarm systems, smoke alarms, and smart cameras.

With Nest, you can remotely control all kinds of devices and receive alerts when there’s too much smoke or CO2 in your house or when the security alarm goes off. With Nest, you can see what’s happening inside and outside your house while you’re away and let people in or lock the doors completely.

One house can be controlled by up to 25 different people, including Google Home users, who have various levels of access. Users don’t need to share a password to a single Nest account. Instead, each user has their own account that’s associated with a set of IoT devices.

One of the greatest features of Nest is Home/Away assist. This feature manages the home automatically: for example, it can turn everything off and switch on the camera when nobody’s at home.

Blossom is an agricultural application that helps you manage your garden or lawn. It automates watering according to the weather and the schedule you set.

Blossom uses real-time weather analytics and processes it in the cloud to react to the weather and water your plants according to the conditions. It offers different setups for various zones, such as front yard, back yard, trees, and succulents.

Just install a Blossom water controller and its app.

Whistle is an IoT application that takes care of your pets. Now you won’t have to run around to find your high-energy dog and keep an eye on it. All you need to do is attach a Whistle GPS tracker to your dog’s collar and install the app. It works great for cats too!

The application will show you the exact location and activity of your pet.

The app notifies you if your pet goes too far away. The greatest thing about Whistle is that it works with GPS and cellular detection technology instead of Bluetooth. While a Bluetooth tracker can locate your pet up to 50 feet away, Whistle will tell you where your pet is even if you’re thousands of miles away.

IoT mobile applications are on the rise. They fully integrate technology in many aspects of people’s lives and free them from worries, daily chores, and the necessity to remember little things.

The most important considerations when building internet of things apps are:

Without these, it’s nearly impossible to get loyal users who will not only download and use your app but also leave great reviews and recommend it to friends. To ensure that your app is secure, stable, and fast, you need to hire an IoT application development team that knows its stuff.

Mobindustry has created an IoT application for a kid’s smartwatch that allows parents to track where their children are. Just like Whistle, we used cellular and GPS technologies to make sure parents are able to track their children even when they’re far away.

If you need a consultation on IoT app architecture or some advice on IoT security, we’re your team.

Do you want to create a hot IoT app that will give users control over their deivces?